We are proud to have worked with many talented artists, well-known brands and respected institutions, in the UK and internationally. Our team are committed to giving the best support to all our clients, as well as fostering strong community links within the arts through professional support for emerging creative practitioners.

Our in-house team offer creative direction, production management, technical consultation and installation assistance. Our network of specialist technicians throughout London and the UK supply equipment and apply expertise to each respective project.

See below for a selection of our favourite projects to-date, spanning a variety of industries and disciplines. 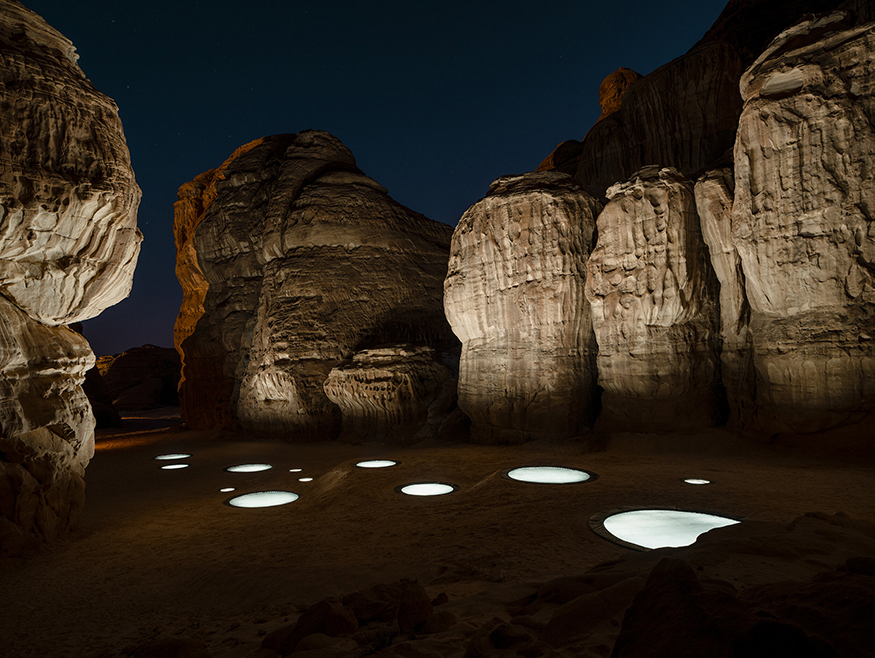 Now You See Me, Now You Don’t

We worked with Manal AlDowayan over six months to help realise her ambitious land art project 'Now You See Me, Now You Don't'. The work consisted of twelve commercial-grade trampolines and over fifty industrial light fixtures embedded into the desert canyons of AlUla, Saudi Arabia, as part of Desert X AlUla.

Despite the industrial scale and nature of the install, the result was a serene series of 'pools', responding to the issue of water scarcity in the region. Although critical, it's playfulness compelled everyone who encountered it to interact and enjoy themselves.

Our role:
Beginning with the earliest sketches and ideas, we assisted with design development, technical drawings and facilitated full-scale material testing at KitMapper's premises in London. We then oversaw on-site testing and geographic surveys with the artist and curation team. During pre-production we handled the logistics and international shipping of all materials, working with our suppliers and freighters across multiple continents. Once all materials had arrived, we managed the production on-site in AlUla, overseeing the entire installation process.

About the artist:
AlDowayan is a multidisciplinary artist who's work navigates between the personal and political. Much of her work interrogates the gender-biased customs that impact the condition of women in Saudi Arabia, her home country. As a sensitive yet critical witness to the cultural metamorphosis engulfing the Kingdom, her works draw international attention and acclaim. Represented by Sabrina Amrani Gallery in Madrid and Gallery Isabelle van den Eynde in Dubai, AlDowayan continues to exhibit internationally in group and solo shows and residencies. 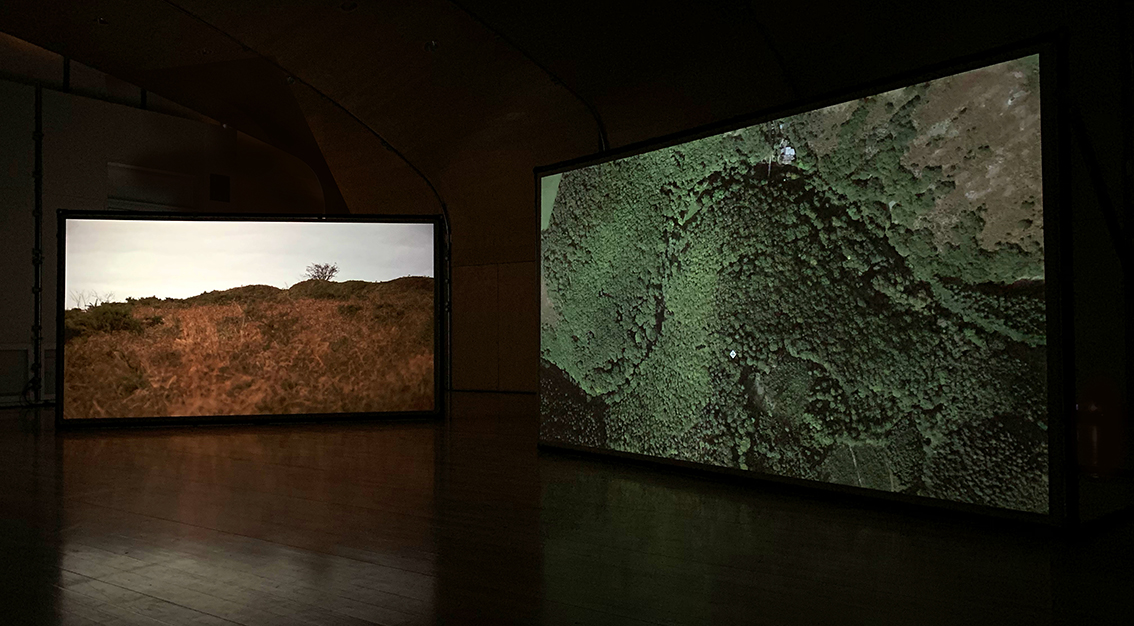 We worked closely with artist Sam Williams to design and build his two-channel synchronised installation 'the actual structure is the material', part of his Film and Performance Weekend at Siobahn Davies Dance, London.

Our role:
The Roof Studio of the RIBA award winning space was occupied by two large rear-projection screens, supported by sleek black aluminium scaffolding structures. These were designed in-house, specifically for the project and to William's specifications, before being installed on site. BrightSign media players were used to ensure the videos were perfectly synced and would function seamlessly for the duration of the show. Our setup was then integrated with the Roof Studio's in-built surround sound system to create a fully immersive experience.

About the artwork:
'the actual structure is material' is a cyclical video installation that acts as a personal and conceptual re-tracing of the relationship between body, site and choreographic archive and is a response to the passing of Rosemary Butcher MBE. It was made with support from the inaugural Stuart Croft Foundation Education Award. The performance and film weekend had also been made possible with additional support from The Elephant Trust.

About the artist:
Sam Williams is a visual artist and filmmaker working predominantly in moving image, installation and performance. He studied at the Royal College of Art, is currently an artist in-residence at Somerset House Studios and has shown his work nationally and internationally.

Credits: Artwork and Documentation by Sam Williams Production and Installation by KitMapper 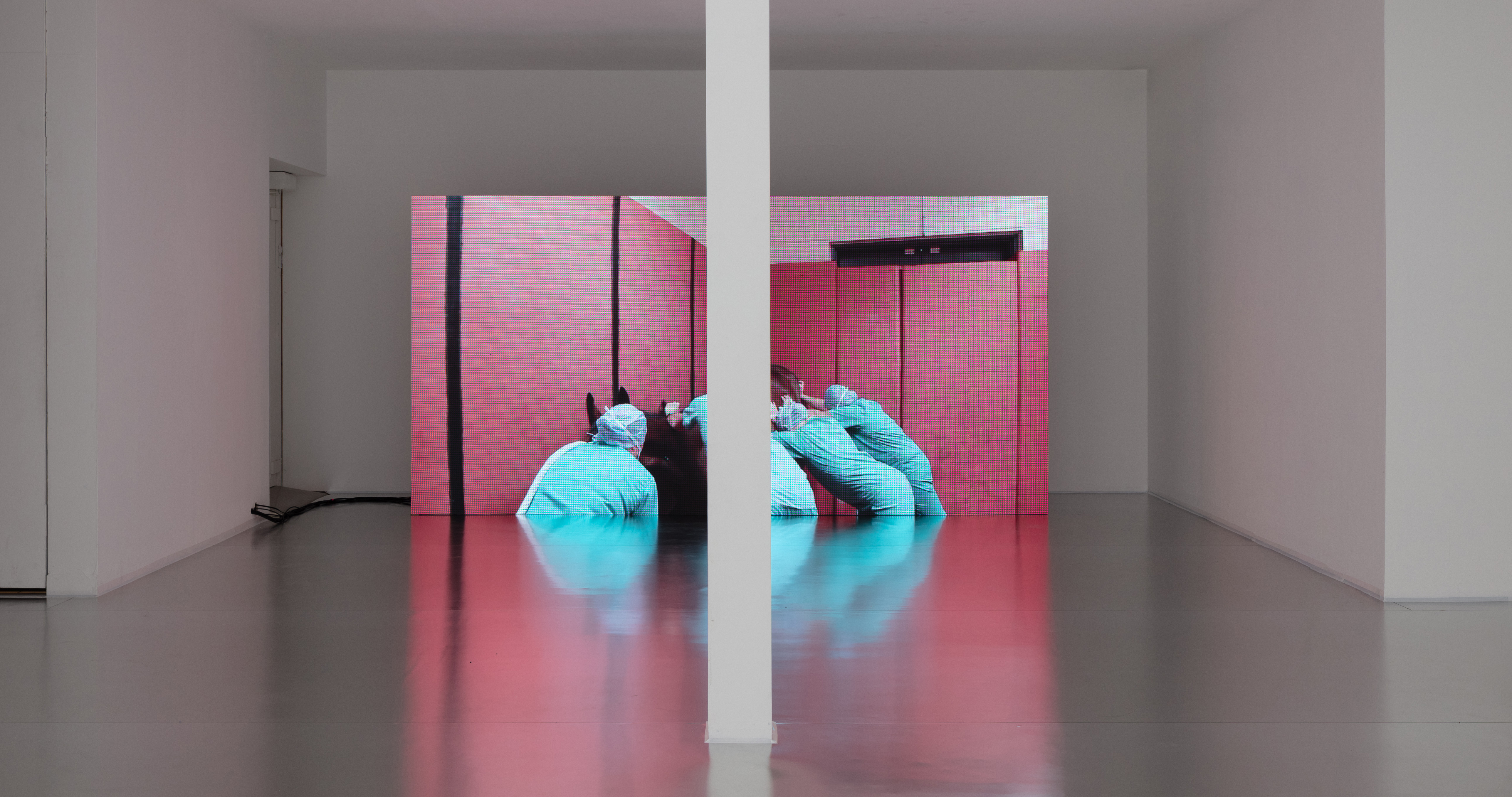 About the artwork:
Luna Eclipse, Oasis Dream was the culmination of the duos Fine Art Fellowship and is the first act of their long-term project Nearly Winning, which considers gambling as a contemporary condition. Imagining the exhibition as an organism, the artists bring together sculpture, film, light, sound, scent and text to create a space inspired by the subliminal strategies which induce self-delusion as a new way of seeing.

About the artists:
Revital Cohen & Tuur Van Balen work across objects, installation and film that explore processes of production as cultural, personal and political practices.

As part of KSI & Randolph's 'Beerus' music video we designed and installed a CRT video wall to be used in key scenes. We used hand-held video cameras to achieve a live video relay from camera to video wall — which was used to great effect in the final video.

About video walls
An ever-popular display method, we supply and install walls of CRT monitors and LED screens for exhibitions and film sets alike. They look as great on-camera as they do in a gallery.

About the artist
KSI is an English YouTuber, internet personality and musician. In 2019, he was ranked second by The Sunday Times in its list of the top 100 UK influencers. He is part of the British YouTube group known as the Sidemen. 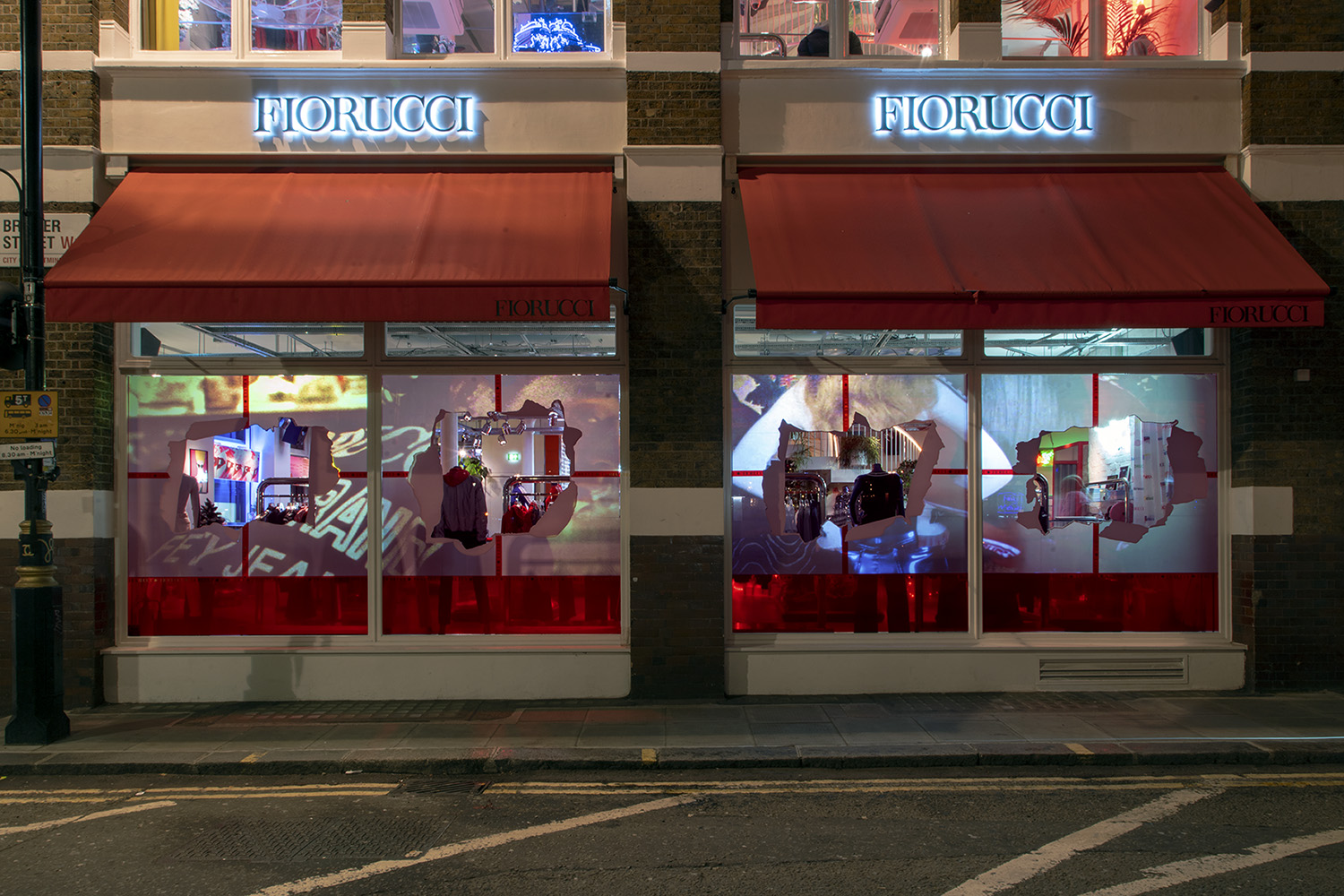 About Fiorucci
Fiorucci gained cult status in 1980's New York, with artists like Keith Haring decorating the walls of the store and a young Madonna playing at the brands 15th anniversary party. In 2017 the brand relaunched with the new store on Brewer Street, right in the heart of London’s Soho. It features a bar, cafe, customization booth and VIP shopping area. KitMapper were proud to work with the brand and enjoyed working closely with the design team to realise their vision.

About projection mapping
Projections can be mapped over almost any surface, and can also include in-built audience interactivity such as sound or motion sensors. KitMapper offers projection mapping services at a range of scales. We've produced multi-channel projections for the Royal Academy of Arts and the Victoria & Albert Museum here in London, as well as consultation for Saudi Arabian artist Muhannad Shono. We also provide projection screen rental, fabrication and installation services. 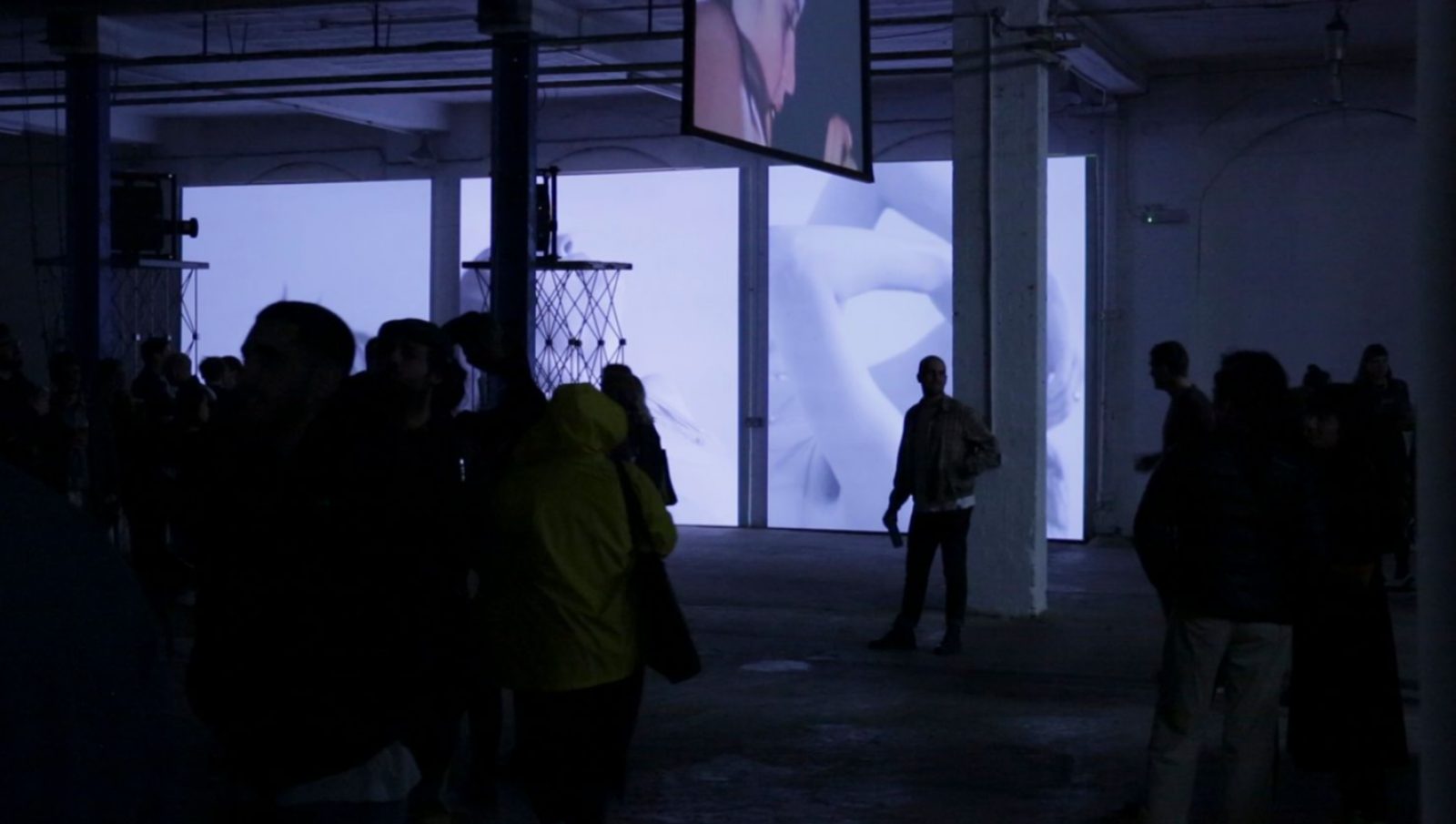 Working closely with respected international galleries and publications, Photoworks, Der Greif and Webber Gallery, we produced and installed their exhibition as part of the contemporary photography festival Peckham 24. With multiple screens projecting above head-height and floor to ceiling projections along one whole side of the warehouse, Copeland Park’s Unit 8 industrial space was used to its full potential. Hundreds visited across the 3 days, with the space also being live-streamed to the Tate Modern during live performances.

Working closely with the artist GAIKA, in collaboration with Boiler Room and hosted by Somerset House Studios—of which GAIKA is artist in residence—KitMapper were proud to production manage, design and construct SYSTEM. Central to the installation was a towering sound system surrounded by a scaffolding structure, supporting a nine-screen sound responsive video installation. 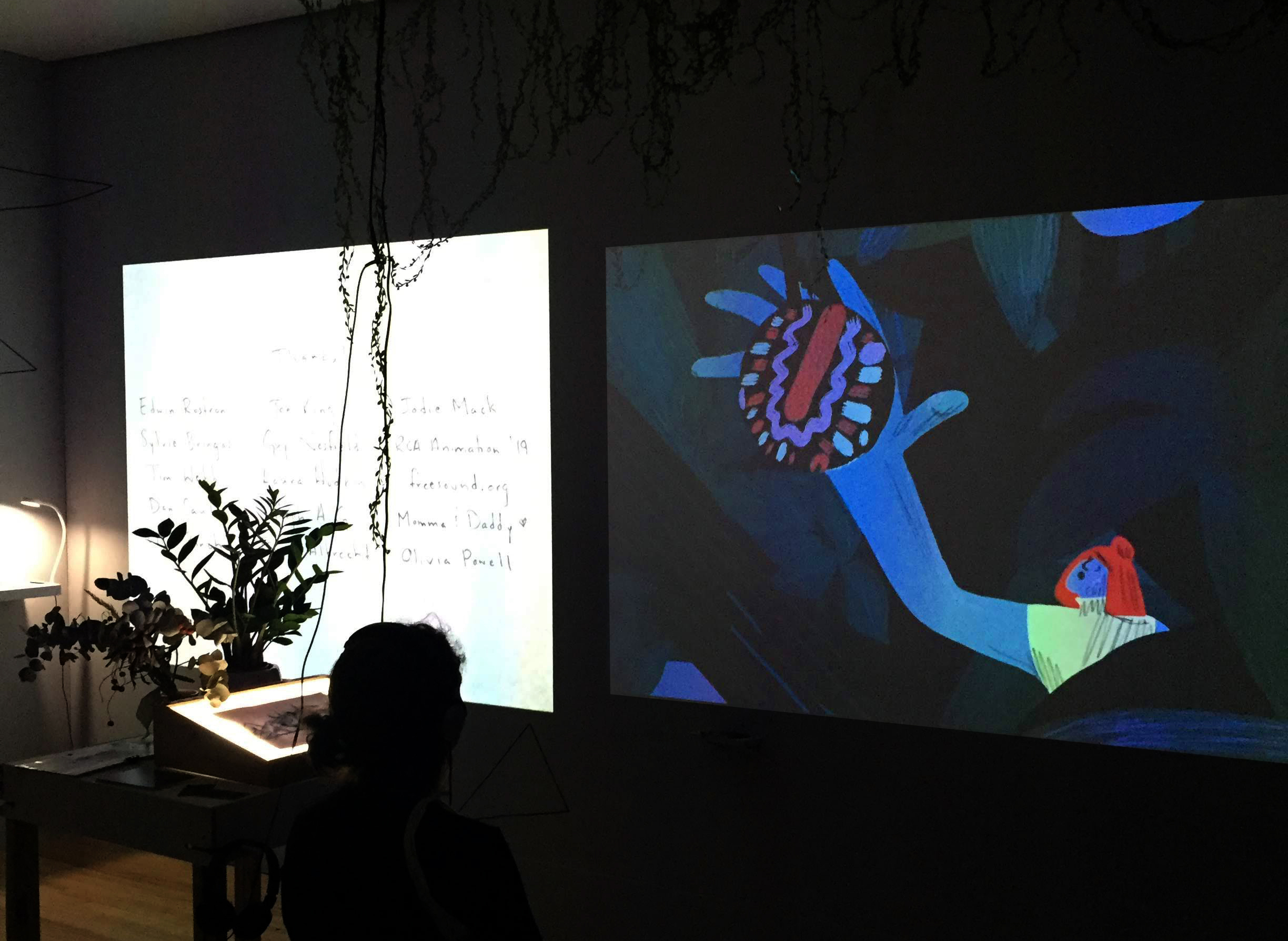 For over five years, KitMapper have helped curate and produce the annual Royal College of Art, School of Communications Degree Show. As part of a long running relationship with the prestigious institution, we've supported the production, curation, installation and kit hire for hundred of talented postgraduate students.

Taking place across multiple sites of the Royal College of Art campus, the scale and ambition of the students’ works always prove a welcome challenge for the KitMapper curation and construction teams.